Last night UK Prime Minister Theresa May said that Novichok is the nerve agent used in the attempted murder of Russian ex-spy Sergei Skripal and his daughter Yulia in Salisbury on 4 March.

Novichok is part of a group of nerve agents – not only unusual but very lethal.

The Prime Minister said that the UK Government concluded, on the basis of the nerve agent used, that there were two option. Either Russia tried to kill Mr Skripal or it has lost control of the nerve agent as this military grade weapon is of a type developed by Russia.

I think most people thought “some kind of poison”? Then, “It must be the Russians” when they first heard the story of a former Russian spy and his daughter found unconscious on a park bench in serene Salisbury.  I guess we remembered in 2006 when Russian defector and former Russian FSB and KGB officer Alexander Livitnenko died the most horrible death from radio-active Polonium- 210. This nerve agent was supposedly slipped into a cup of tea in London. Traces of the same substance are also found at Litvinenko’s house in North London, and at the Millenium Hotel.

Novichok No 5 came to life in the 70s and 80s after the Soviet Union had agreed to halt all its chemical weapons programs. The Russian government, by then under Boris Yeltsin, said that it had never renounced doing research on chemical weapons strictly for defensive purposes. In fact Novichok is a Cold War nerve agent designed especially to get around the international treaties banning chemical weapons.

The existence  of this group or nerve agents was disclosed in 1991 when Vil Mirzayanov, a scientist at Russia’s Scientific Research Institute for Organic Chemistry and Technology, fled to the West. He revealed that Moscow was working on a nerve agent far deadlier than anything ever before created, in defiance of the 1990 Chemical Weapons Accord.

More Lethal than Sarin and VX

Novichok, Russian for “newcomer”, is a series of highly toxic nerve agents with a slightly different chemical composition than the more commonly known VX and Sarin poison gases.

NEW: Nerve agent used to attack Sergei Skripal and his daughter in Salisbury was ‘Novichok’, first made by Russia in the 70s/80s.

– 5-8 times more lethal than VX.
– Effects take 30 seconds to 2 minutes
– Can be dispersed as an ultra-fine powder instead of a gas/vapour.

Just so you know, VX is the chemical that was used to kill North Korean leader Kim Jong Un’s half-brother at the airport in Kuala Lumpur, Malaysia, in February 2017. And VX is so deadly that the United Nations lists it as a weapon of mass destruction.

While full details of the chemical makeup of Novichok remains secret to this day. A Novichok agent “causes a slowing of the heart and restriction of the airways, leading to death by asphyxiation,” Gary Stephens, a professor of pharmacology at the University of Reading in England, told Reuters on Monday.

It seems that Novichok can be made with agro products and it works by blocking messages from the nervous system to the muscles.

Though the ingredients found in the agent are relatively accessible, turning them into a chemical weapon requires the expertise and equipment typically only found in government-level laboratories, the Australian Broadcasting Corporation reported.

Most Novichok agents are so-called binary weapons — that is, they’re made up of two separate nontoxic components that become lethal only when they’re combined. It is not known yet in what form the agent was applied to the Skripals – powder, gas, liquid, or how they came into contact with it. Because of the timeline they may have been contaminated in their home.

UK PM Theresa May said there are there are two options – either the Novichok attack was by the Russian government or else they let somebody else gain access to their nerve agent.

I think there is a third possibility – somebody is setting up the Russians. I don’t know how probable it is, but it is surely an option. 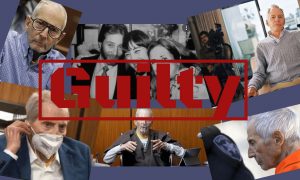