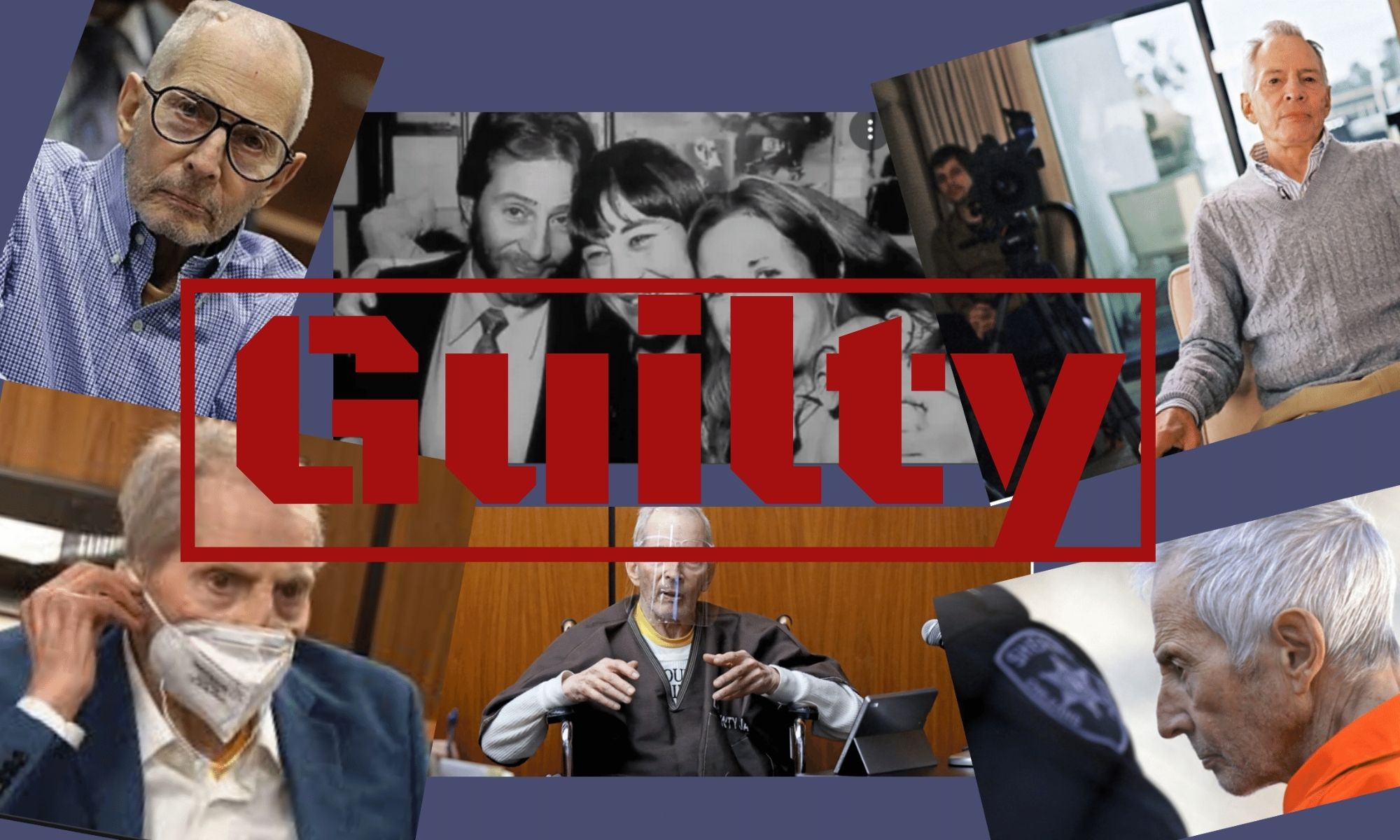 Not even larger than life, Texas lawyer Dick De Guerin, could save Robert Durst from himself on 17 September 2021 as he was found guilty of murdering his best friend Susan Berman in Hollywood on 24 December 2000.

Durst, 78, was not in court for the verdict from the Los Angeles jury that deliberated about seven hours over three days. He was in isolation at a jail because he was exposed to someone with coronavirus.

The verdict marked the first homicide conviction for a man suspected of killing three people in three states over nearly 40 years.

Durst’s strange story has been the subject of many true crime shows and All Good Things, a 2010 film starring Ryan Gosling and Kirsten Dunst. The man is soft spoken and charismatic. He is obviously narcissistic because Bobbie Durst is all he ever speaks about. And you notice from video clips from his younger days to now, at almost 80 that there is something strange about Bobby that you just can’t pin down. He is probably somewhere on the spectrum and lies all the time about everything.

And then came the one that cooked his proverbial goose, the HBO documentary – The Jinx: The life and Deaths of Robert Durst. (Available in South Africa on Showmax). Bobby once again thought he was smarter than everybody else, and he really enjoyed being in the limelight, so he wanted to do a documentary about himself.

In early 2015, a six-part HBO documentary titled The Jinx: The Life and Deaths of Robert Durst described circumstantial evidence linking Durst to the murder of Berman, who was believed to have knowledge of McCormack’s disappearance.

In The Jinx’s final part, Durst is heard muttering to himself: “What the hell did I do? Killed them all, of course.”

Hours before the last episode of The Jinx aired, Durst was arrested by FBI agents on March 14, 2015, at the Canal Street Marriott in New Orleans, where he had registered under the false name “Everette Ward.” Durst, who had been tracked to the hotel after making two calls to check his voicemail, was observed wandering aimlessly in the lobby and mumbling to himself, having driven to New Orleans from Houston four days before.

Throughout the trial, prosecutors painted a portrait of a rich narcissist who didn’t think the laws applied to him and ruthlessly disposed of people who stood in his way. They interlaced evidence of Berman’s killing with Kathie Durst’s suspected death and the 2001 killing in Texas.

The Beginning of the Robert Allen Durst Saga

Robert Alan Durst, known as Bobby is an estranged member of one of New York’s wealthiest and most powerful real estate dynasties. During one of his many trials, he was diagnosed with Asperger’s and although his actions and appearance have been very bizarre over the years he seemed to get away with murder and outrageous behavior for his whole life.

At the time of her disappearance, McCormack was a student in her fourth and final year at the Albert Einstein College of Medicine in The Bronx, studying to be a pediatrician; she was only a few months short of earning her degree.

Although the couple argued and fought that evening of 31 January, Durst maintained that he put his wife on a commuter train to Manhattan from the hamlet of Katonah in Westchester County, in the U.S. state of New York. He changed his mind many times about whether he actually saw his wife step onto a commuter train for Manhattan on the night she disappeared in 1982 and said he lied to police when he told them he later spoke to her on the phone.

Her worried friends raised red flags when she didn’t arrive in New York as arranged and tried to file missing reports for days. Later that week Durst filed a missing report.

Their marriage was abusive – McCormack had been treated at a Bronx hospital for facial bruises three weeks before her disappearance. She told a friend that Durst beat her but did not press charges over the incident. She also filed for divorce and only wanted $250 000 as a settlement, but instead Durst cancelled his wife’s credit card, removed her name from a joint bank account, and refused to pay her medical school tuition.  At the time McCormack disappeared. Durst had been dating Prudence Farrow for three years and was living in a separate apartment.

The New York City police didn’t ever do much of an investigation, saying that she probably just left.

Eight years after McCormack’s disappearance, Durst divorced her, claiming spousal abandonment. In 2016, the McCormack family asked to have Kathleen declared legally dead, a request that was granted the following year.

On the run from prosecution in New York, Durst fled to Galveston while he eluded investigators who were looking into his wife’s disappearance. While there, he assumed the identity of a deaf and mute woman called Dorothy Ciner and befriended his neighbor, Morris Black.

It has been said that people go to Galveston to get lost, and that’s what 58-year-old Robert Durst and his 71-year-old neighbor, Morris Black, had been doing until a series of grotesque discoveries put them in the spotlight.

In 2001, parts of Black’s dismembered body were found floating in Galveston Bay. Durst was arrested and charged with murder.

Durst stood trial in 2003 in connection with Black’s death.

He admitted to dismembering Black’s body but claimed he shot Black in self-defense. As Black’s head was never discovered, police weren’t able to confirm where exactly he was shot.

The jury ultimately acquitted Durst of murder, but he was sent to prison for five years in 2004 after pleading guilty to evidence tampering.

He was given credit for time served and was released from jail on parole in 2005. He was sent back to jail for less than a year after he violated the terms of his parole.

Susan Jane Berman, a longtime friend of Durst who had facilitated his public alibi after his wife’s, disappearance, was the daughter of David Berman, a reputed gangster who in the late 1940s operated the Flamingo Hotel and Casino in Las Vegas, Nevada.

Susan and Bobby met when they were students at the University of California, Los Angeles and were very close over the years. Susan had “money-problems” and Bobby had given her over $50 000. Prosecutors suggested she was trying to leverage more money from him by telling him she was going to speak with the cops about how she helped to cover up his wife’s killing.

On December 24, 2000, Berman was found murdered execution-style in her home in Benedict Canyon, Los Angeles, California, after her neighbors called the police to report that her back door was open and her three terriers were loose. 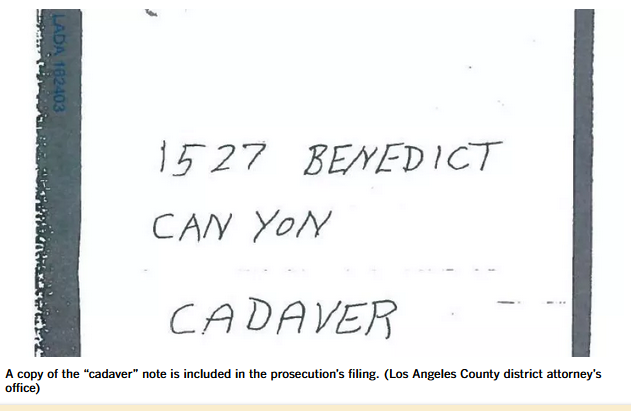 Despite the inconsistencies in the writing analyses over the years, the cadaver note has striking similarities to a letter Durst sent to Berman in 1999. In both samples, the writing is in all capital letters, and Beverly Hills is misspelled as “Beverley Hills.”

Durst, who was so confident on Jinxed that he couldn’t be connected to the note, told filmmakers “only the killer could have written” the note, which contained merely the address of Berman’s house in Beverly Hills and the word “cadaver”.

Filmmakers confronted him with a letter he sent Berman a year earlier. The handwriting was identical and Beverly Hills was misspelled as “Beverley” on both. He couldn’t tell the two apart.

For those who have been following the many crimes of New York real estate heir, Robert Durst and marveling how he got away with at least three prominent murders it seemed like justice at last.

Together with the many guises of Robert Durst, who the prosecutor referred to as a “narcissistic psychopath” there are a few other colorful characters in this story. The first must be the collective Durst family, and two famous legal minds, Dick de Guerrin and Jeanine Piro and of course the Jinxed film makers

The surname Durst is one synonymous with power and influence in New York City.

Robert Durst’s grandfather Joseph arrived in the city from Gorlice, in present-day Poland, in 1904.

The Durst Organization now manages or owns some of the city’s best-known landmarks, including One World Trade Center, the Bank of America Tower and the Conde Nast headquarters on Times Square.

Bobby has been on the outs with his family most of his life and they have kept their distance from one another. At one point, 13 court-backed protection orders were in place against him by family members.

Andrew Jarecki, the film-maker behind the new documentary, The Jinx, said: “The story is so operatic. That’s what’s so fascinating to me – seeing someone who is born to such privilege and years later is living in a $300-a-month rooming house in Galveston, Texas, disguised as a mute woman.”

Read: Andrew Jarecki reflects on the year he got Robert Durst to admit that he ‘killed them all. 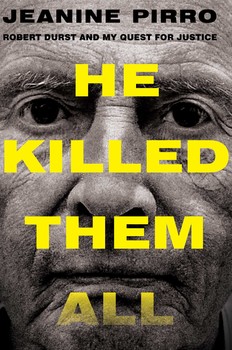 Former Prosecutor Jeanine Pirro, served as the Westchester County D.A. when Kathie Durst’s case was reopened.  In 2000 she wrote a book – He killed them all – about her exhaustive fifteen-year investigation into Robert Durst for the disappearance of his wife Kathleen Durst. Pirro, now the host of Justice with Judge Jeanine on Fox News, always believed in Durst’s guilt, and in this shocking book, she makes her case. Pirro, also a very controversial figure and pretty much a narcissist as well, is one of the colorful support players in this Drama.

When Durst was arrested in New Orleans after Jinxed, she said she hoped Durst, then in custody outside New Orleans awaiting an initial trial on gun charges, lived long enough to be tried and convicted of murder, after which “I want to dance in my Manolo Blahniks on his grave.”

Texas criminal defense attorney made his reputation handling tough cases. He defended David Koresh, Tom DeLay and Allen Stanford, and is known to be large than life. In the Galveston murder case, DeGuerin used a self-defense argument and won. His client, New York real estate heir Robert Durst, admitted to killing and then dismembering the body of his 71-year-old neighbor Morris Black, bagging the body parts and tossing them into Galveston Bay.

Killing and Dismemberment of Morris Black

On October 9, 2001, Durst was arrested in Galveston shortly after body parts belonging to his elderly neighbor, Morris Black, were found floating in Galveston Bay.

Durst claimed he and Black, a cranky and confrontational loner, struggled for control of Durst’s .22 caliber target pistol after Black grabbed it from its hiding place and threatened him with it. During the struggle, the pistol discharged, shooting Black in the face. During cross-examination, Durst admitted to using a paring knife, two saws, and an axe to dismember Black’s body before bagging and dumping his remains in Galveston Bay.

Asked in March 2015 whether she believed Durst murdered Black, Judge Susan Criss, who presided over the Galveston trial commented: “You could see that this person knew what they were doing and that it was not a first time. The body was cut perfectly like a surgeon who knew how to use this tool on this bone and a certain kind of tool on that muscle. It looked like not a first-time job. That was pretty scary.